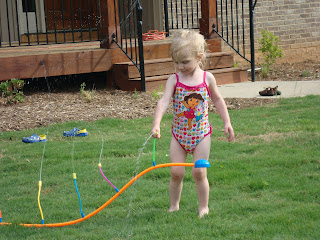 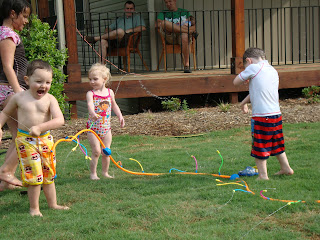 The kids are getting crazy! 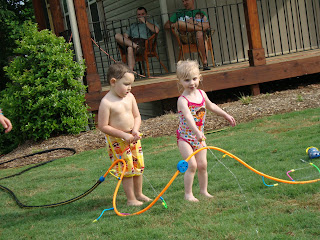 Elijah spraying Lorelei with the sprinkler 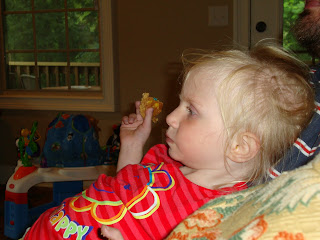 Relaxing with a cookie after a hard play in the water.

Last weekend we went to Greenville to the Lollipop Shop with Palmetto Hearts. Lorelei was able to fill a bear up with candy, well actually Daddy and I filled up the bear and Lo decided she needed to rearrange the candy in the baskets. We then went to Abbie and Shannon's house to have a picnic with some friends. In attendance were: Shannon, Abbie, Elijah and Micah, Sonny, Rhonda, Preslee, Kerrigan and Zeb and us. Elijah and Zeb are Lo's heart friends and you would never even know that they had a CHD. They were CRAZY! We had tons of fun, with good food, great friends and even getting sprayed with water by the 2 and 3 year olds. They were all about getting the adults wet! John got it the worst I think. I hope we can do it again soon!

Dr. B was SO pleased to see Lo today! She did great, got on the big girl scale without a fuss(23.8 lbs 10th percentile, laid down to get her length/height 36in (92nd percentile), and let him listen to her and check everything without even a wince. She even let Ms. Candi prick her toe to get her hemoglobin (great by the way), without a peep. The shots however a totally different story. She got over it once we got a sticker and some cereal.

I can't believe what a big girl she is now. Now to get her off of her bottle (ANY IDEAS WOULD BE APPRECIATED) and getting her to sleep through the night!

Good job Lo, Mommy is proud of you!

This is one of the best days of the year since I get to just hang out with my family and relax and do nothing! Sometimes you just need one of those days!

Happy Mother's Day to:
Mom
Jeanne, John's Mom
Jeannette, my sissy
My Grandma Charlotte
John's Grandma Mary
and all my friends, other family and Heart Mommies!

We hope you have a great day!

Wow, I cannot believe it is May already! Time is really flying!