Dr. Shuler called me this morning and said that he had spoken to Dr. Bradley yesterday and they agreed that she did need a sedated ECHO and NOT a heart cath! Yeah! So we go to MUSC July 9 to get the ECHO and then meet with Dr. Bradley to figure out a course of action for Lo! I am so grateful that she doesn't have to have a heart cath yet! Have a great week, apparently mine is starting to look up! (Lo still has a fever but that's ok I think it may be breaking!)
Posted by Jess at 7:01 AM No comments:

Today we took Lorelei to the cardiologist. It was a good visit, she was good while they took her blood pressures and listened to her heart. She got a little annoyed with the ECHO but she just wanted to run around. Dr. Shuler said that her pressures were higher then they were the last visit but her heart muscle isn't thickening. (good) He is going to consult with Dr. Bradley, Lo's surgeon, and we will know at the end of the week if and when we will go to MUSC for a sedated ECHO and a heart catherization. These will show us better pics of her heart and Dr. Shuler seems to think that a peice of tissue just needs to be cut out around her aortic valve so the pressures will go down instead of her having to have the Ross Procedure where they would do valve replacements. I will let you know when we know. Keep praying!
Posted by Jess at 10:15 AM No comments:

Also, Shannon and I are going to try to get some donations Tuesday afternoon! We are bringing the kids so they will know who they are donating for. Lorelei likes to show off her belly so showing her scar won't be a problem for her and Derrick's not old enough to know any better :O) Wish us luck!
Posted by Jess at 12:39 PM No comments:

For those of you who know me, you know that I am always on time with birthday cards, anniversary cards and Christmas cards. This past year I haven't sent any cards at all! I am trying to get better with it. I never realized how busy you are as a Mommy! So I am here to say Happy Birthday and Happy Anniversary to those who I have missed this past year.
I also always send Thank You Notes and I have been very slack on that too. So to those of you who have sent Lorelei, John or I gifts or gave money to Palmetto Hearts: THANK YOU! You don't know how much we appreciate everything everyone has done for us!
Please bear with me as I am trying to get back to being 'me' and I AM getting there! :O)
Posted by Jess at 12:34 PM No comments: 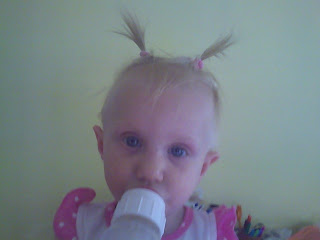 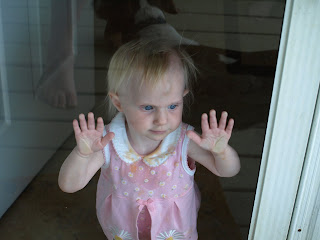 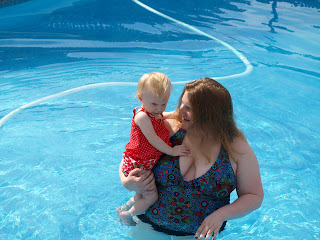 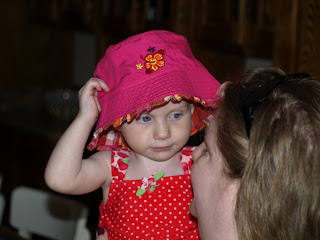 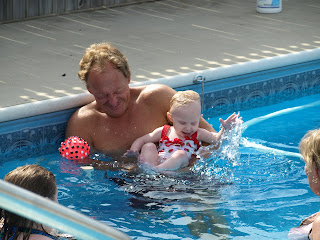 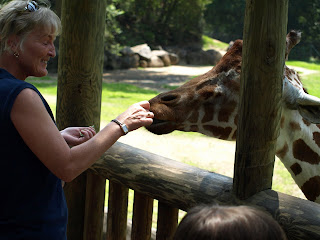 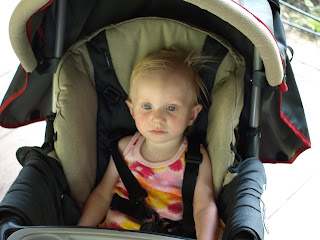 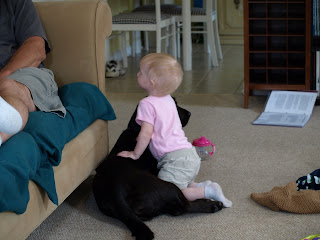 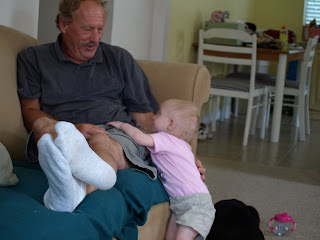 So this week John's parents have been visiting us. Lorelei loves being with them. We took her to the zoo on Tuesday and she slept through most of it. At least Jeanne got to feed the giraffe. Lorelei loves to climb on her puppy too! Lola doesn't mind much.
We also took her swimming in Memaw's pool. She loved it.
Posted by Jess at 12:16 PM No comments:

As you all know John, Lorelei and I are members of a group called Palmetto Hearts. They have helped us tremendously with Lo and her heart issues. They give all the babies that get to PCICU at MUSC a basket called an Annabelle Basket (SEE SIDE BAR). This was one of the best gifts we received when we were there. So now my friend Shannon and I are on a new venture. We are trying to put together some baskets for the older kids that go to MUSC for heart surgeries. We need to include some comforting items, along with some entertainment as the kids are stuck in the bed, bored. The baskets would probably be for one-ish year olds and up. We are only able to work with donations as we don't have a budget! Here are some of the things we need....
* A name for our baskets
* Ideas for what should go in the baskets (we're thinking water bottles/sippy cups, blankets, socks, toys, stuffed animals, i spybags, books, stickers, crayons, coloring books, pens, journals,toiletries, craft kits, playing cards, toddler toys, match boxcars, sunglasses, beauty kits for little girls (nail polish,etc)) Any other ideas???
* And if you'd like, you can make a donation! We would love any of the above items (or if you think of something else, that works too) if you would like to give them! If you decide you do want to help, email me (jessaro77@yahoo.com) and I'll send you and address where you can send them.
Shannon and I are very excited about this new project~! If you can please donate! ( I hate to sound like a beggar but...it's for the kids!)
I will try to update later about the things going on in our lives... John's parents are in town for the week so it may not be until the weekend.

Oh, by the way, suggestions for the basket names should be given ASAP! Thanks again!
Posted by Jess at 9:59 AM No comments:

This is a copy of the letter I wrote about finding out about Lorelei's CHD for the Letters of Hope for Broken Hearts campaign, if you would like to write a letter or visit the website it is www.ourlettersofhope.com. I know I haven't updated in a while and I will soon, I promise!

On April 18, 2008, our family was blessed with a beautiful daughter named Lorelei. She was perfect in every way and everyone who saw her said the same! The next morning when the pediatrician came in to talk to me he said that he had heard a murmur and that was normal but if he was to hear it again he would get an ECHO done. I didn’t think anything of it because I had known that some babies are born with murmurs. On Sunday, Dr. Bonnett came in and said he still heard a murmur and they should do an ECHO the next morning but God had other plans and the ECHO was done Sunday afternoon. We were able to be in the nursery when she had the ECHO done and they did it twice, I kind of thought that was odd but didn’t think anything about it until Dr. Bonnett called.

The phone rang in the room and I heard him say “There is something wrong with the baby’s heart, Dr. Shuler, the pediatric cardiologist will be there soon to explain everything.” My heart sank because right after that the nurse’s and a NICU doctor came and said “We have to take the baby.” There is no explanation for what I felt and the panic that had set in. Thank goodness my mom, who is a doctor, was there to explain what was going on. Dr. Shuler came in and explained to us that she had an Interupted Aortic Arch and a VSD. They were going to fly her down to Charleston,SC and she was going to be at MUSC. All I remember asking my mom after that was “Is she going to die?” and my mom assured me that she wasn’t.

We went up to the NICU to see her right before she was flown off. She only had a diaper on and she had wires coming out of her belly button. We couldn’t hold her, only rub her head. She was crying all the while. Before they fly the crew takes a picture to give the parents and of course she was screaming in the picture. John, my husband, spent the night with me that night and I don’t think we got much sleep. The next morning, I was discharged from the hospital and went home packed and drove 2 hours to Charleston.

Once we arrived in Charleston we immediately headed to the PCICU to see our daughter who had been away from us for 24 hours already. I broke down. She was swaddled in a blanket with IV’s and meds. She was not able to eat because of the medicine she was receiving and I ached for her when she cried because she was hungry.

The nurses, fellows, cardiologists and staff of the PCICU were AWESOME to us! They, of course, were concerned about their patient but they also look out for the parents and make sure they are doing ok too! They explained everything to us and Lorelei had open heart surgery at 6 days old on April 24,2008. She did very well through surgery and throughout the next few days. At one point we counted that she had 16 tubes and/or wires coming out of her at once. She is a trooper and a fighter! They told us that we might be there a month but we were only there for 2 weeks! They let us go on May 2,2008.

We continue to see Dr. Shuler, her cardiologist every 3 months as her aortic valve is not growing as well as it should be and she will at some point have to have another open heart surgery called the Ross Procedure. This will replace her aortic valve with her pulmonary valve and then she will have a valve replacement on her pulmonary valve. By looking at her you would never even know she had a Congenital Heart Defect. She is a walking (running) 13 month old and talking to everything, scared of nothing!
There have been many strides taken to get where we are in CHD research but more has to be focused on this issue! Hopefully my story will help in creating more awareness!

Jessica Friedel ~ mom to Lorelei (IAA,VSD)
Posted by Jess at 5:48 PM No comments: